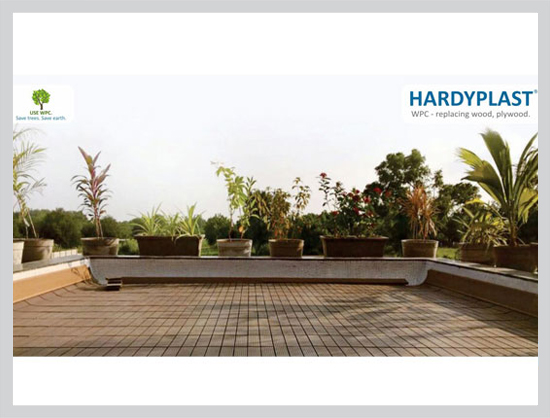 Wood polymer composite and India both are becoming popular for each other nowadays. India, as a country is becoming popular destination for PVC based WPC board’s supply. Country is set with more than 35 odd manufacturing lines for WPVC sheet lines and more than 10 lines for profile production.

PVC (Poly vinyl chloride) is a major raw material for making WPVC products and Reliance has been Instrumental as a major supplier from within the country. Apart from Reliance local manufacturers are importing PVC from abroad. Companies have well understood the subject and gained enough knowledge about raw materials. PVC additives also are being imported directly by the existing players and major supplier is China, again. Recently, Reliance prices are reduced and companies are offering price discount benefit to the Indian market, positively.

At the other end, Gurjan scarcity and increased resin prices are making plywood more and more costly, day by day. WPVC is being controlled by PVC prices and effectively capturing the market, replacing plywood. WPVC decking, exterior cladding, lumbers and fencing are really becoming popular within end users including architects, interiors, builders and retailers. Good demand is being generated and manufacturers are really less!! WPVC is becoming stronger with new experiments in the quality by Indian players. PVC processing needs lot of patience, as it is the subject of formulations. You can make customized WPVC boards, as per your technical need. WPVC sheet can be made 100% Fire retardant by adding Fire retardant additives. E.g. Finolex PVC cables. Mosquito repellents also are being added, based on the application requirement. Most importantly, WPVC boards can be custom made in any colors and you can directly apply it for the end use, without HPL or paint.

There is specific demand being generated directly from the end users for PVC WPC solid sheets. WPVC is enjoying replacements for both the ends, where at one end it replaces Marine grade plywood and at second end it replaces hollow PVC profile market. Hollow PVC profile based doors and furniture market is evolved very fast within a few years. It has also captured a considerable market share of wood panel furniture. That market is nowadays started being replaced with solid WPVC boards, as it looks and works similar like a wood panel. Awareness is still a problem and we forecast presence of big ticket players in WPC market very soon.