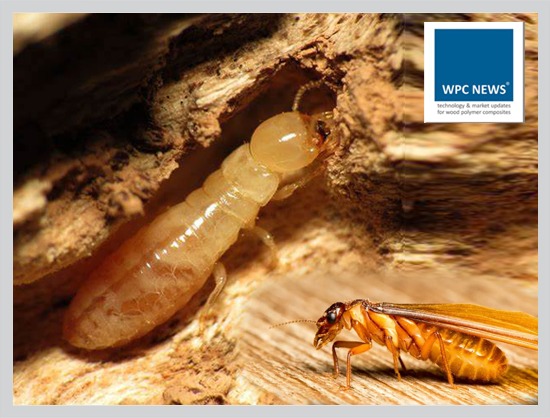 Termite attack is considered to be the most dangerous phenomenon to the entire furniture and wood applying systems anywhere in the property. Yours may be a luxurious villa with best quality treated wood based furniture, but termite can generate colonies there any day, without your knowledge. It may be a fiver star hotel rooms or may be a lavish farm house or may be a high rise apartment, termite can attack anywhere.

In Ahmedabad city we receive many clients those are majorly living in multi storey apartment. They come here for finding WPC materials, as their entire apartment at 14th floor has got termite. On his massive request I personally go and visit their property sometimes. What I see is the totally affected furniture and wood in the home with termite. They show me their Door frame, Door, Kitchen furniture, their wardrobes, bathroom furniture everything is attacked by termite. They ask me the reason for this issue and it always kept me silent, as I could not find any technical reason behind termite. Usually termites are developing their colonies inside the furniture body. They create large colonies by giving birth to baby termites in a mass. They move forward in narrow channels from the soil to the cable holes upto the terrace of the building. Where ever thy find holes or cracks, they create an eco-system for their survival.

Termites can unexpectedly explode from a tiny hole in a wall or a crack in cement creating a horrific scene for homeowners known as a termite swarm. The swarm is the emergence of large numbers of reproductive termites from a termite colony, usually in the spring when conditions are just right. These winged insects, brownish black and about the size of a grain of rice, surface in Kansas on a warm (around 80° F) afternoon usually after a rainy period. They emerge in large numbers, sometimes totalling hundreds of insects.

Years are going working with WPC products and many such guests we keep receive at HARDY SMITH WPC CENTRE complaining about termite issues. Farm house families come and complain that they had bought a new farm house last year and installed with wooden furniture of handsome investment. They were our for around 8 months to other country and when them come back, their entire furniture system is attacked by termite. This can be understood as they have a house built of a farm land. It can be considered as a sensitive area for termite attack. But when cases come from Apartment living people in 12th floor in Kolkata or 14th floor in Ahmedabad, it makes us wondered. Recently a team of architect visited WPC CENTRE for some material purchase. They were mentioning one incidence where their interior project was about to finish with total furniture at one Villa in the city. Covid Lock down announced and they had to hold their work for around 2.5 months. But when they opened up the property again after 2.5 months, what they could see is ‘Termite everywhere’. In a short period of just 2.5 months it vanished the wooden furniture.

Since 2011 we have been working on WPC product, technology and market development. Hundreds of people we have met and discussed about the potential of WPC against termite and moisture attacks. Many carpenters and architects we have been meeting since more than a decade now. Termite behaviour has been a topic of discussion on a regular interval.

One major input out of these meetings is the pattern of growth for termites are changed and have become aggressive. The time was too long before for appearing termites in furniture. It was in years. But now it has started appearing in days! It has become a subject of research, as there can be a genetic discrepancy because of overall climate change and weather.

Based on the market feedbacks, experiences of carpenters and architects and redevelopers we have come to know about ‘Flying termites’. They prevail as per the information received and they take freedom of wings for starting their colonies on high rise apartment floors. Cases of 14th floor and 18th floor furniture system attack by termite can be related to this type of termite.

Termite swarm is caused when a mature termite colony develops reproductives, little bit like baby termites, that are released with a temporary set of wings, hence many people notice after a swarm there are hundreds of little wings lying everywhere. This is because, they are not great fliers & designed to be released from a high spot & catch the breeze. The ones that are lucky enough to survive will dig into soil & create a new termite colony. That being said, don’t let the fact that most flying termites die within about 24 hours of taking off reassure you. By the time you’ve noticed them, a mature and well-established nest has been built in the area — perhaps for years.

Flying termites exists because they are spreading out in an attempt to make nests of their own. This leads us to yet another negative point, namely that flying termites who find mates can live for more than a decade, creating thriving colonies whose primary occupation lies in eating wood, wood, and even more wood. That can translate into immense damage to your structure.

Termites aren’t exactly diurnal or nocturnal. Rather, temperature does more to regulate their behaviour. Termites typically remain most active when temperatures stay above 21 degrees Celsius and rarely dip below 15 degrees Celsius. This means that termites tend to cause problems during spring and summer, although they can technically remain active during any time of the year. Now you can imagine the weather like India where Delta of Temperatures moves between 5 degree Celsius to 55 degree Celsius.

Considering this overall situation of termite’s growth and sensitivity we see WPC Board as a medicinal product for making furniture in India. Becoming a polymeric structure WPC Board cannot be eaten by termites, thus they cannot survive for a long. They cannot create colonies with reproductive cycle as they do not have food to it in WPC. There is no moisture accumulation, thus termite cannot find a comfortable eco-system for colony development and survival. Wood has natural fibers those can be used as food by termites but Polymer cannot be used.

All above facts and information derives a typical conclusion that termites are becoming more aggressive with their growth pattern in Indian atmosphere. They are not being controlled even by chemical treatments and they reappear very soon now. If WPC boards, WPC Door frames, WPC Doors are used termite problem can be effectively controlled and resolved.