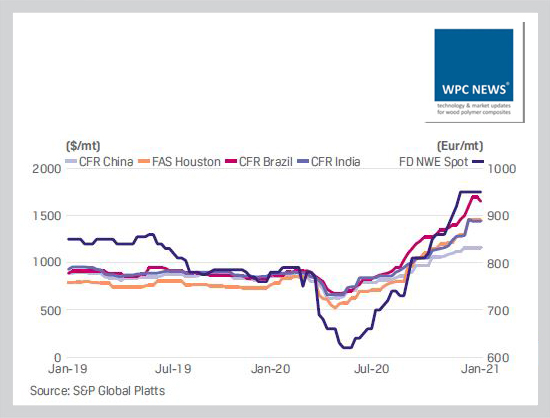 Global polyvinyl chloride demand and pricing have had a turbulent 2020 as the coronavirus pandemic initially crushed construction activity before sharp supply constraints revived it. Going into 2021, those supply-driven highs that softened in January after force majeures were lifted could often further after turnarounds wrap up and if Northern Hemisphere demand wanes as is typical going into winter.

However, the pandemic upended typical patterns where demand thins during winter months and mild weather has allowed construction activity to continue. Coronavirus second waves have continued to hit regions worldwide, and the global supply squeeze has lingered, with producers unwilling to ramp up chlor-alkali rates because caustic soda demand remains weak. And buyers keep coming.

“Consider this,” a US market source said. “If you have hungry people, giving them a morsel at a time, they’re going to remain hungry all the time.”

In the US, operational issues and a one-two punch from hurricanes in Louisiana siphoned supply from August through the rest of 2020, prompting Formosa Plastics USA and Westlake Chemical to declare force majeure. Market sources had expected supply to loosen up by November, but Hurricane Delta’s arrival in early October delayed restarts, and a string of government inspections as well as operational issues prevented Formosa from ramping up.

Those issues spread to Latin America, as turnarounds and one of those force majeures squeezed available upstream vinyl chloride monomer, prompting Mexico’s Orbia to cut rates. Brazil’s Braskem also cut PVC rates and had a brief shutdown because of operational issues and a lack of available ethylene dichloride feedstock from the US, prompting customers to swallow both a tariff and antidumping duties on US material.

The supply-driven squeeze pushed US export PVC prices from a 12-year low in April to an all-time high in December, the highest level since S&P Global Platts began assessing it in 1983. Prices in Brazil surpassed those in all other regions.

Market participants see that tightness lasting through the first quarter and into the second quarter of 2021 as Shintech’s expansion of output throughout the PVC chain has been delayed from March to mid-2021. Winter weather could tamp down some demand, but the push for single family housing amid the pandemic remains strong and prices have yet to reach a tipping point.

“COVID has changed the landscape,” a source said. “Our business is suffering because of the lack of product and the unpredictability of what to do and what not to do.”

Persistent tight supply is expected to keep Asian PVC markets stable to firm in the first quarter of 2021, with a price correction predicted in the second quarter as output rises. However, Asian market participants do not see a steep downturn as demand would likely remain firm, particularly in India.

Asian PVC markets hit multi-year highs in the fourth quarter of 2020, driven by tight supply from the US as well as South Korea, prompting a rare fourth-quarter bull run that bucked typical seasonal demand declines.

India could also see upticks in early 2021, with buying appetite expected to rise amid economic recovery after coronavirus setbacks. Tight South Korean supply is expected to linger in early 2021 amid an ethylene supply shortage, and that landscape is expected to keep key regional supplier Formosa Taiwan’s monthly offer prices firm in the first quarter after a $100/mt year-end increase.

“After the sharp price increase for December, Formosa would be unlikely to offer down for next few months,” a market source said.

Market participants were also closely monitoring the status of new PVC plants in China that brought 700,000 mt/year in new PVC capacity online in the second half of 2020 with off-spec output.

“These new PVC plants would likely start on-spec production early next year,” a trading source said. “In that case, there will be more PVC exports from China.”

However, sharp spikes in freight rates could stymie such outflows if the container shortage in Asia lingers, a market source said. By November, prices had reached $7,000 per export container in China, just for the space.

Domestic European prices reached a 24-month high in November, while export prices reached a nine-year high that was nearly double the 2020 low of $600/mt seen in May. However, by January, European supply and demand is expected to re-balance with less panic buying and production issues resolved, “once the value chain is filled again after the hole that was created in April-May,” a market source said.

In Turkey, a key European export market, global supply tightness pushed prices to a nine-year high as well in November, among some of the highest prices in the world. However, general economic worries in Turkey remain, with the lira-dollar exchange rate and inflation worries dampening market sentiment. “Buying power is a question mark right now, and causing the imbalance in supply demand fundamentals,” a Turkish source said.